APS Motorsports is a company based near Warrington, founded to develop and market the best components for the road, through to the highest levels of motorsport.

All of the specialist automotive parts designed, manufactured and sold by APS are also actively being used on their own projects. 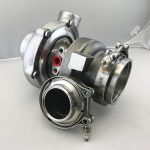 Following a direct recommendation from an existing @mounsey client, APS Motorsports got in touch with @mounsey to discuss the feasibility of having a professional, all-new Website developed. With an existing, sizable following on Social Media, a Website was the next logical step to further promote and develop the business.

From the outset it was clear that a flexible, easy-to-use eCommerce system would also be a key requirement. After discussing and assessing their requirements, I once again opted to work with WooCommerce – as it not only met all of their initial requirements, but also offered the scalability and levels of customisation that would clearly be equally as important – moving forward.

This particular client was very keen to utilise in-house staffing resources, in order to expand and develop product lines (and categories/departments) available on the Website, post initial completion.

In order to ensure that this requirement was addressed I included an on-site WordPress & WooCommerce training session. This was delivered on a one-to-one basis, at the client’s premises, during to the closing stages of the Website development process. As with all @mounsey training sessions, I ensured that a core list of topics were covered – but the session was then adapted on-the-fly, focussing on aspects of the WordPress and WooCommerce systems that the delegate was less familiar with (their initial level of I.T. ability was high on this occasion, so once it became clear that there was already a strong grasp of the basics, I swiftly moved onto more complex Website editing skills).

I factor such flexibility in to all training sessions, ensuring maximum value is gained from them.

Due to other commitments that the client had (on other business ventures), this particular project had a longer than usual gestation period. It eventually launched successfully in 2017 – and since that time the already broad range of parts has been further expanded, entirely in-house (as originally planned).

“(Ladies and) Gentlemen… start your engines!”

The lifespan of a Website can be hard to predict, largely due to the fast-moving nature of modern "Web" technologies.

Websites by Mounsey Web Consultancy are designed to be as future-proof as possible, including support for modern smartphones & tablets as standard.